Flowers in the 405 window in memory of Bud Larson Rev Rachel Blanchflower at Little Gransden Air Show when she took the memorial service. She remembered the 405 Squadron and made special mention of Bud Larson as requested by his family.

The spitfire flew over the field during the service. 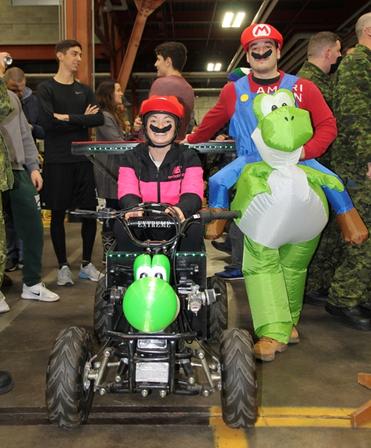 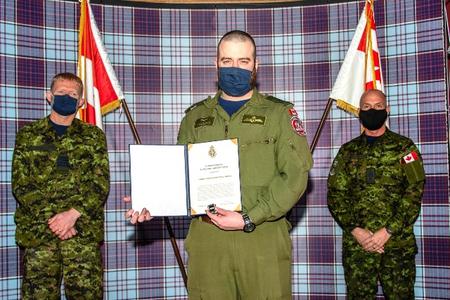 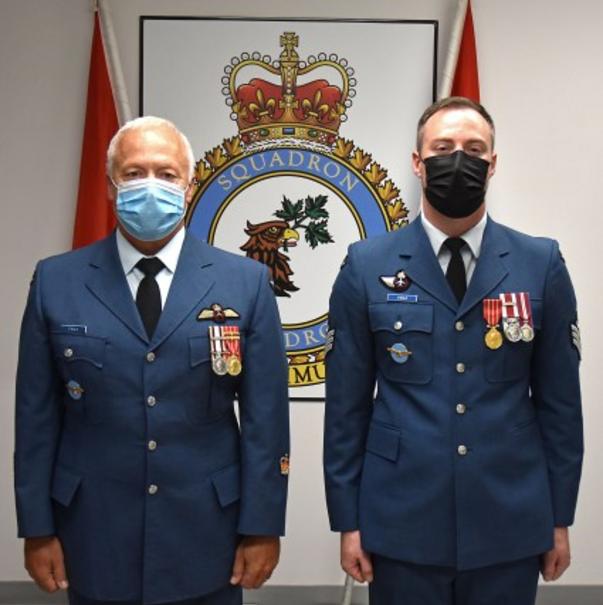 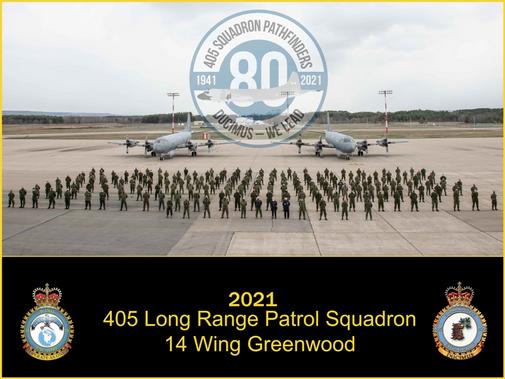 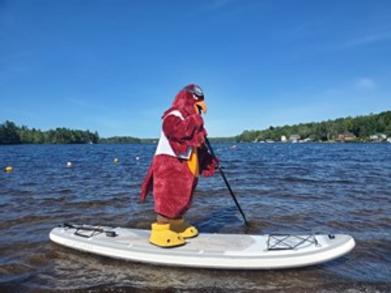 The following email was received by the 405 Squadron Association. The sender was Tez Watson from the UK and this is his story:

“On the 19th June 1981 my wife Sandra and I were married spending our honeymoon night in the Ramnee Hotel in Forres. We arrived late and the place seemed deserted but we could hear voices beyond reception so I went to investigate. With confetti still on my suit I found members of 405 Sqn RCAF celebrating their last night in Scotland, They spotted the confetti and my wife and our luggage and invited us to join the party. We drank Moose Milk and were given a 405 Sqn baseball cap before we made our excuses etc. I was serving at RAF Kinloss on the Nimrod Line and wore the cap until it fell apart some years later. I left the RAF after almost 22 years then pursued other careers but returned to a uniformed life (albeit part-time) as a Reservist in 2017 and I'm currently employed on 1 (F) Squadron who fly the Typhoon. I just thought I'd say "Hello" and thanks from my wife and I for the kindness shown four decades ago. We celebrated our anniversary in Arbroath two weeks ago and look forward to travelling more extensively once the pandemic restrictions are lifted. Slainte, Tez & Sandra Watson.”

When Art Lagendyk went up to the attic of his Agassiz home, the last thing he expected to come across was a historic treasure trove.

Lagendyk and his wife, Clara, bought a local home that used to belong to District of Kent Mayor Sylvia Pranger and her late husband, John. While working in the attic, Lagendyk came across an unassuming, covered wooden box filled with medals, official documents and newspaper clippings. Art contacted Sylvia about the box, and she left the box to the Lagendyks’ care

Earlier this year, Art Lagendyk gave the box to his friend, Theo Gantzert, who documented Calhoun’s life, submitted documents and photos to The Observer, began a search for next of kin and contacted the Bomber Command Museum of Canada in Nanton, Alberta about the box.These items belonged to Flight Lieutenant Maxwell Boyd Calhoun of St. Lambert, Quebec, a bomb aimer and pathfinder aboard Avro Lancaster PB239 heavy bomber that was shot down in 1944. FULL STORY

After 2 years of searching the Association finally found a veteran’s group to be affiliated with. Carol Molyneaux put us in touch with Steven Murgatroyd, co-founder of the Veteran’s Garden Project near Windsor NS. I had the opportunity to meet Steve and the other co-founder Jessica Miller and their story is quite interesting.​ 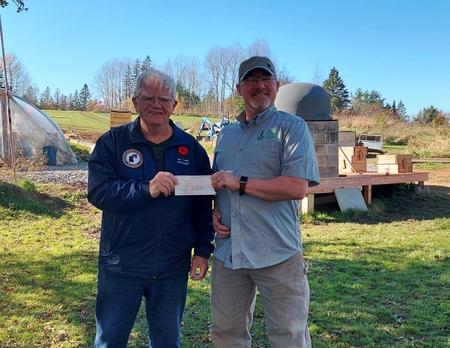 CONGRATULATIONS TO AVR A.J.S. MAILLOUX ON BEING AWARDED THE CHIEF OF DEFENCE STAFF COMMENDATION FOR PROFESSIONALISM AND COMPASSION WHEN PERFORMING CARDIOPULMONARY RESUSCITATION FOR MORE THAN SIX MINUTES ON A MAN IN CARDIAC ARREST, BERWICK, NOVA SCOTIA, 24 FEBRUARY 2019 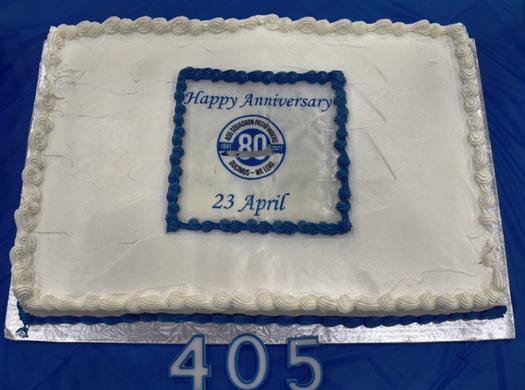 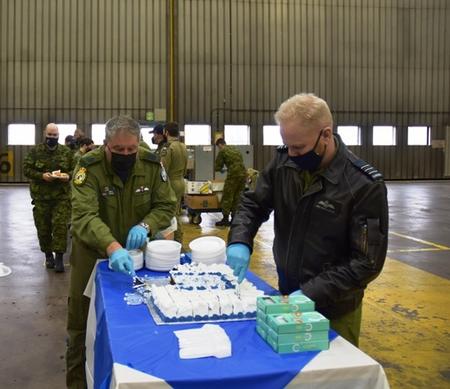 The 405 Squadron memorial stone with this year’s memorial wreaths placed on it. The one on the left was placed by the Royal British Legion. The right hand one was from the Cambridge Gliding Club members who fly from Gransden Lodge airfield. 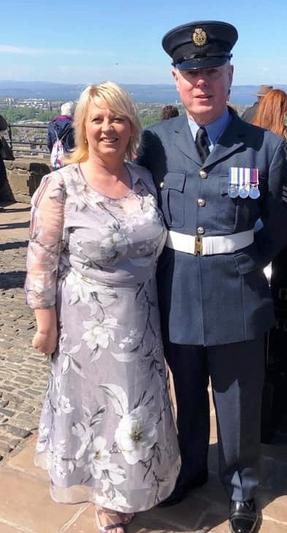 Tez and Sandra Watson taken on the 18th         May 2018 in Edinburgh Castle on the occasion of renewing their wedding vows. 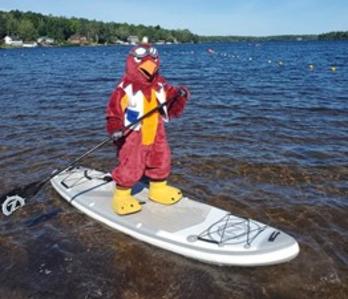 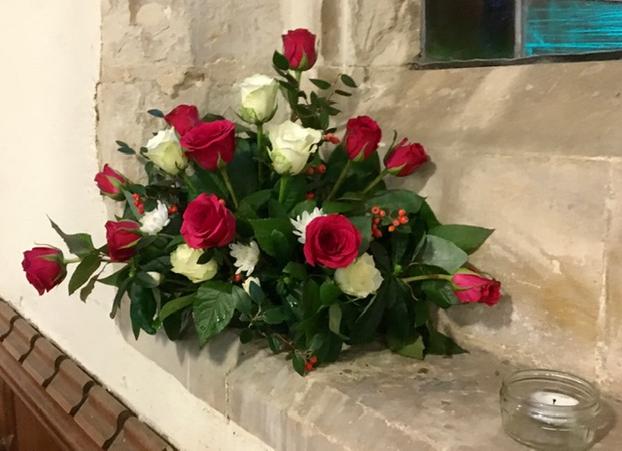 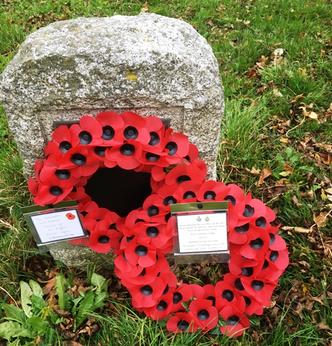 Casey, the 405 Squadron Mascot, drops in on 2 Crew’s summer party. 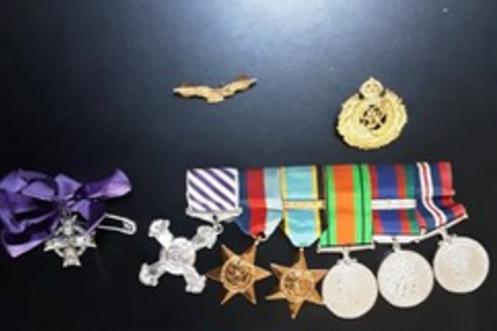