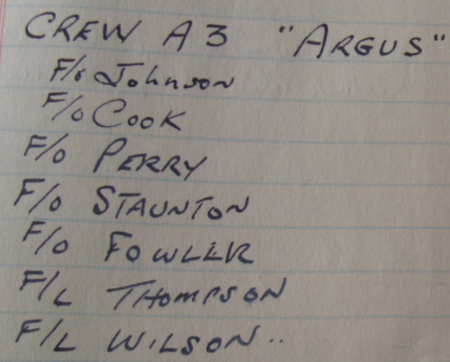 I am researching approx 4,000 signatures in a visitors' book that was kept in the officers' mess at RAF Leuchars from 1938 to 1966. It is a Who's Who of aviation, WW2, and Cold War history, and it contains many Canadian signatures. On 16 Sep 1960, it was signed by "Crew A3 "ARGUS"" with the address "No 405 Squadron RCAF, Greenwood, Nova Scotia, Canada, and the following names (no initials): F/Os JOHNSON, COOK, PERRY, STAUNTON and FOWLER; F/Ls THOMPSON and WILSON. I can find several RCAF officers named FOWLER in the Canadian Gazette, but it's impossible to identify who signed the visitors' book. I would be most grateful if your records could provide the full names of this crew. By the way, I did find what I think is a reference to this flight in The Scramble Show Reports RAF Leuchars September 1960 - "An RCAF Argus made two passes overhead - but was never seen!" I very much look forward to hearing from you. With kin regards, Trevor Baker, Royal Leamington Spa, Warwickshire, England​  tkb@dr.com
​Type your paragraph here.

RESPONSE: From Jack Fowler - Guess I was on that trip; it was part of an airshow. Pilots: Ian Johnson, Bob Perry, Doug(?) Cook. Navs: "Sea Level" Thompson and me (Jack Fowler) Wilson was RO (of WWII vintage) Staunton was likely the FE'

We were on a 3 week detachment to Kinloss (my first) It included the first night departure of an Argus at Kinloss (Sept 6) and resulted in the shredding of about 200 of a flock of 500 sea birds that had just settled in for the night by the field. The ZX museum has pictures. Around the same period an Electra (precursor to P3) crashed after hitting one starling.