When we received the Neptune’s they came without the jets. On many occasions the piston engines would backfire causing great consternation amongst the crew. On this particular flight we were doing a MAD cloverleaf. We came out of a turn, diving down to the required 50 feet over datum when both engines backfired. Our RO was a French Canadian and over the ICS came “Skipper-she be firebacking”. At about the same time, there was a bang by the Radar Op seat. I looked forward from the nav table and saw the second nav scrambling out of the nose hatch into our compartment. He was white and unhappy, how he got out of the nose so quickly I do not know. In the meantime our pilot had the aircraft in a climb and was feathering the engine that seemed to be in the worst shape. We were ninety minutes south of Greenwood and I counted every minute as we made our way home, with one out and the other occasionally backfiring.

Fun and games in the nose of the Lanc

To relieve the boredom of nose lookout watching wave after wave of nothing, I decided to have fun with the pilot. I carefully reached up and slowly applied a constant pressure to one of the rudder pedals. To compensate the pilot applies trim. When he had the Lanc trimmed straight again; I applied more pressure and watched him as he re-trimmed the aircraft. When he thought that he was comfortable I released the pressure on the pedal and of course the Lanc immediately swung to one side much to my pilots consternation. To avoid any panic I informed him that I was the culprit, he took it in good spirits.

6 May 55, Lancaster 868, F/O Gerry Saul and crew on a crew training flight in the Bay of Fundy. Gerry was keen that his navigators should be provided with the opportunity to drive the old Lanc so as to experience the problems the pilots had in maintaining the precise headings that we navigators insisted that the pilots follow. I took my place at the co-pilots wheel and through considerable coaching by Gerry was able to carry out some radar homing’s. After a while Gerry decided that I should be subjected to the Lanc’s antics upon losing an engine, so he feathered Number 1.

The old girl swung and changed altitude at will and I just followed along. Gerry got us back straight and level and I took over again. To give me a second chance, I stayed at the controls as we unfeathered and attempted to restart Number 1. However, it would not start. So Gerry took over and we headed back to Greenwood. On approach I am standing behind Gerry,

watching his expert handling of the aircraft on three engines. He reaches down to select flaps and the flap handle came away in his hand. He held the flap handle up in the air, curses and hands it to me. In the meantime the Lanc, exposed to full down flap, rears up like a bucking bronco. Gerry regains control and makes his usual smooth landing. This was a good lesson for me and thereafter I was more tolerant of the pilot’s effort to maintain heading and most of the time I remembered to inform the pilot when I had finished astro shots. 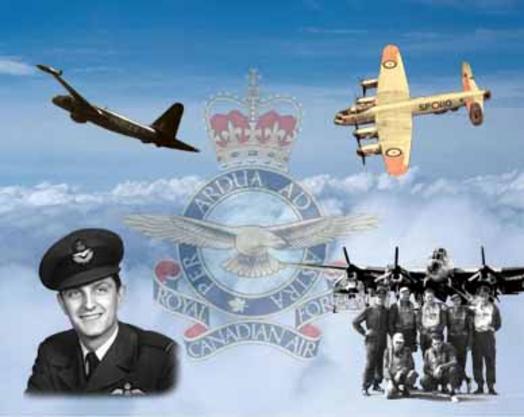