The Greenwood Art Association (GAA) presented the 68th original painting to the Museum's art collection which was accepted by Wing Commander Col Pat Thauberger. Featured on behalf of the entire team is LCol Brendan Cook who led the first of the ongoing rotations for Operation Impact in the Middle East. Seen here also is HCol 405 Squadron Bert Campbell who, on behalf of the Museum and GAA, was instrumental in the design process for the painting. 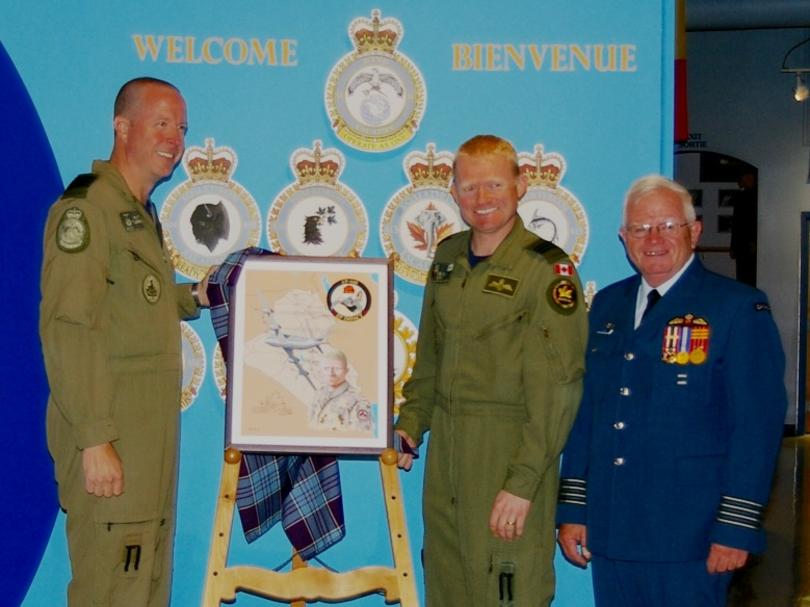 New artwork depicting Roto 0 of Operation Impact sheds light on what the long range patrol community does. Lieutenant-Colonel Brendan Cook, the former commanding ofﬁcer of 405 (Long Range Patrol) Squadron at 14 Wing Greenwood, was back in Greenwood September 26 to unveil the latest addition to the Greenwood Military Aviation Museum’s military art collection. The piece, by artist Pete Robichaud, proﬁles Cook, but tells the story of the team – air crew, ground support and folks back home – as it took on a new mission over Iraq in the fall of 2014. “We had an incident, one of the fellows found a scorpion he thought was dead and was poking it with a stick,” Cook said, at the formal presentation of the picture. “We quickly learned our lesson with scorpions, and that’s actually a good metaphor for what the LRP community does: we go dormant from time to time and people don’t know what we do. Then, Op Impact comes along and we’re up with incredible vigour and dangerous as hell to enemies.” Cook cited the challenges in standing up Roto 0 on short notice, including “growing pains” with working an operation out of a foreign, unfamiliar airﬁeld from day one, even as ground accommodations and headquarters were developing around aircrews. “We got in that ﬁrst mission and set the tone: we did our job and immediately started learning our lessons. We could learn, move and evolve as a force quickly – and all because of our excellent people.” Mission support centre crews were “the unsung heroes in those early days,” Cook said. Maintainers missed just one aircraft mission launch, and “did amazing things to get us in the air.” Aircrews “rolled with the ambiguities… and headquarters kept us sane.” Beyond in-theatre support, Cook said every squadron in the LRP community, including branches at 14 Wing and 19 Wing Comox, “kept us doing our job.” 14 Wing Greenwood Commander Colonel Pat Thauberger formally accepted the artwork from the donor Greenwood Art Association, one of dozens now showcasing 14 Wing’s people and operations, past and present. “The operation we’re now doing is creating history, showing the evolution of our capability with the Aurora from antisubmarine warfare to a multi-role, multi-sensor, multi-mission aircraft. We can see what folks are doing now: target development and dynamic targeting for strike aircraft – not something thought about 20 years ago.” Thauberger is preparing personnel from his wing to man Roto 4 this fall. “It’s difficult, but it’s a testament to the teamwork, morale and welfare in the LRP ﬂeet that we excel. This ﬂeet will be deployed, there will be an Operation Next, and we’ll be one of the ﬁrst assets Canada and the Canadian Armed Forces looks to sustain an operation. This is the new normal for us, and we’ll remain ready for the challenge.”