On Sunday, 19 May 2019, I attended/represented 405 Sqn at the 30th Anniversary of the Stain Glass Dedication (which was actually a re-dedication) originally held on 15 May 1989.

It was an honour to be present for this event as I vividly remember when at the time LCol Claude Naud (CO) brought a 405 Sqn delegation to Gransden to commemorate this event.

Since, 405 Sqn has returned to Gransden on numerous occasions and rest assured that we are always welcome with open arms and outstanding hospitality by the local villagers and more specifically Val & John Davison (cc’ed above).

Val & John are the pillars in maintaining the link with 405 Sqn in the village, supported by the Gransden Society and others like Chris Sullivan who wrote the book Trials and Tribulation: The Story of R.A.F. Gransden Lodge. (the station became the base of the only Canadian squadron in the R.A.F.'s elite Pathfinder Force).

Val & John Davison the force behind the village supporting 405. 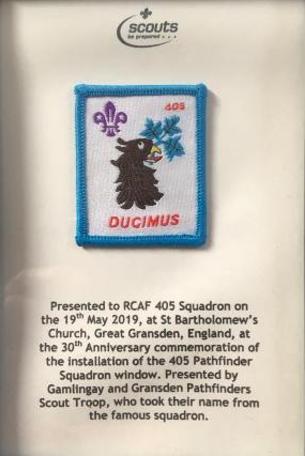 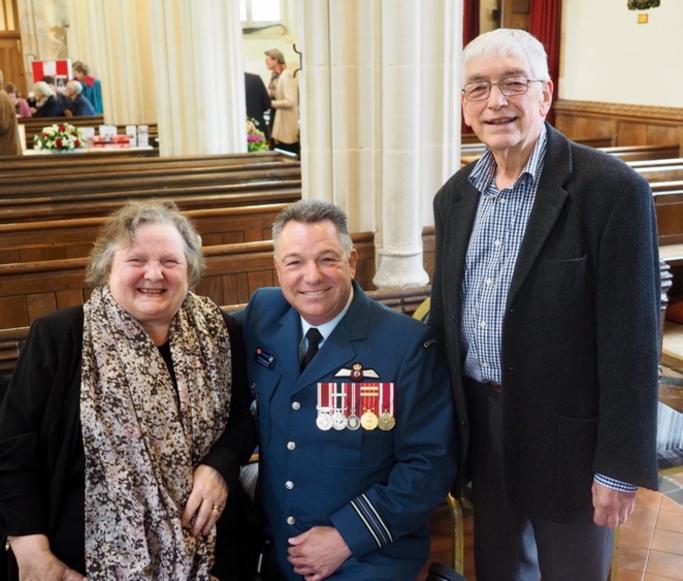 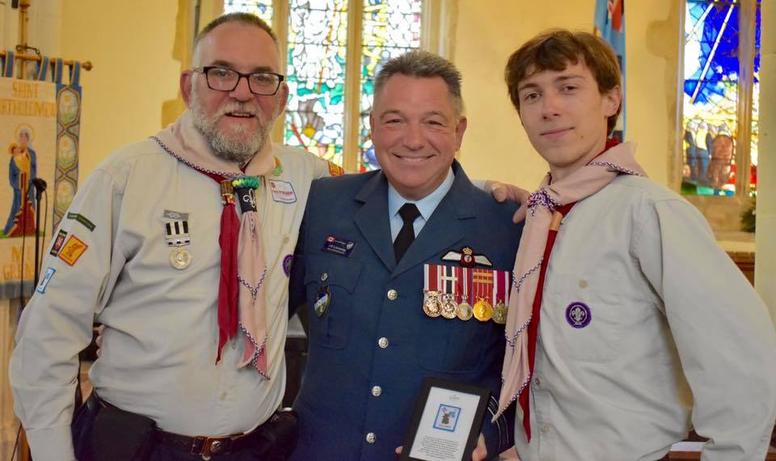 To this end, after the dedication ceremony, I was presented with a small frame with crest of the local Pathfinder Scout Troop who took their name in honour of our famous Sqn in order to ensure that the legacy of the Sqn is maintained for years to come. 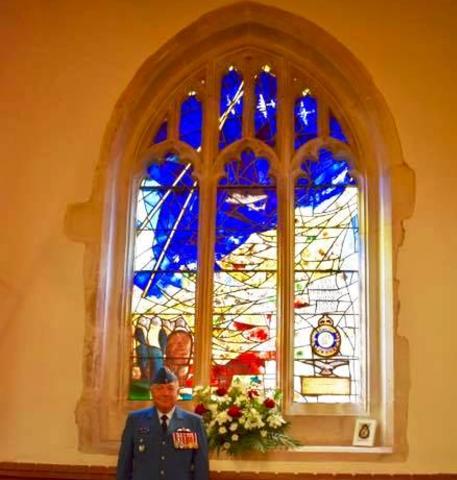 All to say that it was an emotional day/ceremony and all present were extremely thankful for 405 Sqn connection to their village.

Finally, you may recall that back in August 2011, 405 Sqn participated in the Little Gransden Charity Air Show - Founder and organiser, Dave Poile, and annual event.

I understand that due to financial constrain that 405 Sqn will not be participating in the Pathfinder March in June. I remain available to continue liaising and offering my presence to any event/activities that you may wish me to attend on behalf of 405 Sqn.

Having served 3 tours with 405 Squadron under the leadership of 9 different Commanding Officers where I also had the privilege and honour to meet Wing Commander Reg Lane (DSO, DFC & Bar) who served as Commanding Officer from Jan to Aug 1944, the only Lorna Hayes and a close friend of mine Jerry Fultz (DFC & BAR) where in 1994 he was appointed Honorary Lieutenant Colonel and then Honorary Colonel of 405 Squadron and his famous closing line was always “and may you have many happy landings”…  I truly feel that 405 Sqn will always be home!