See Above the simple sonar image of the actual layout of all the Halifax HR871. The wing areas are marked by the  x-x-x-x but are located under the sand.

See above the HR871 crew after bailing out over Sweden and being interned , skipper Alwyn Phillips in the back row on the left with his mates McLean, Mainprize, Knight, Andrews, King, and Kohnke with ( lower left) a Swedish military person – perhaps a chaperone! 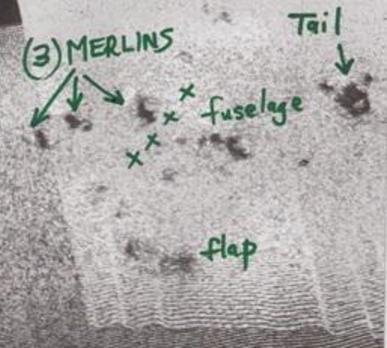 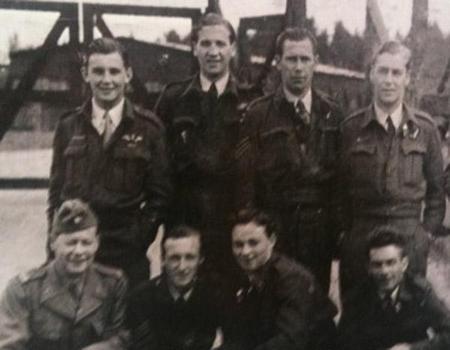 RCAF Halifax HR871 was from the famous Canadian 405 Squadron of RAF 8 Pathfinder Group during 1943 and this squadron was led during this combat period by none other than Group Captain Johnny Fauquier DSO** and DFC!

The Skipper of HR871 on the night she went down (Aug. 2-3, 1943) was John Alwyn Phillips DFC DFM. All the crew were able to bail out over neutral Sweden after 2 engines had failed on a raid to Hamburg. Alwyn was the last man out of HR871 and he trimmed her to fly out toward the waters off Sweden before jumping. HR871 crashed on the water and Alwyn parachuted onto land, right on top of a cow in the middle of the night!  Alwyn was happy but the farmer was not, for the cow was dead and who was going to pay for it? The crew all landed safely.