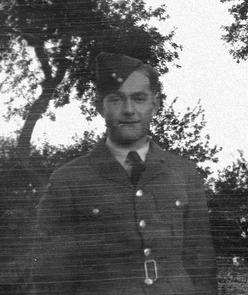 Sgt Sidney Harvey was on the first 405 Squadron aircraft that crashed killing all on-board in the Second World War.

"Cologne and Dusseldorf were the main targets on the night of 16/17 June 1941 and it was the former, that 405 Squadron contingent operated, in company with a hundred other aircraft of four types. The raid was disappointing, scattering a few bombs across the city and Sgt MacGregor and his crew were last  heard transmitting on w/t at 0303, four hours after take-off. W5522 never arrived back, and presumably crashed into the sea on the way home, taking its crew to an unknown grave."  ​ from the 405 Squadron WW ll Profile by Chris Ward.

Special thanks to Diane Roberts, the niece of Sgt Harvey, for providing his photo.