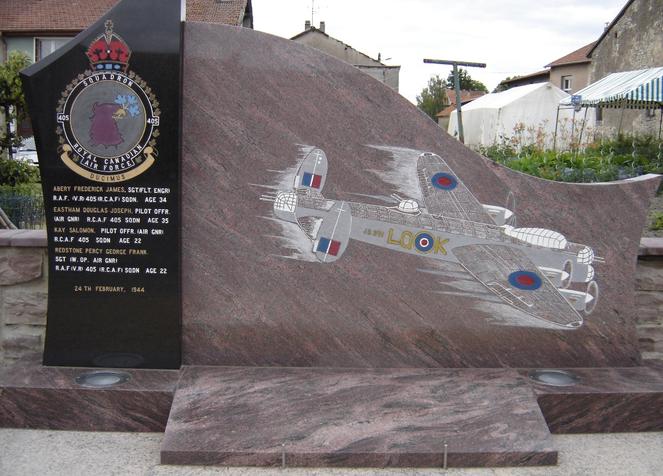 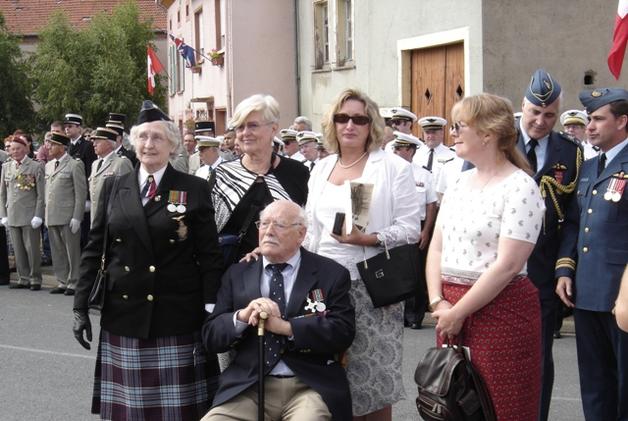 
A stone monument, in memory of four wartime members of 405 Squadron, was unveiled on July 4, 2004, in the little village of Bermering, in the Lorraine/Moselle region of  Eastern France, approximately 45 minutes SE of Metz.

In the early evening hours of  February 24, 1944, Lancaster III JB241/LQ-K from 405 Sqn, 8 Group, Pathfinder Force, lifted off the runway at  RAF Gransden Lodge.  The crew members were: F/O Basil Jackson, DFC, RCAF, pilot; F/O RH Freiburger, RCAF, navigator; F/O John A. Radford, RCAF, bomb-aimer; P/O Douglas Eastham, RCAF, mid upper gunner; F/S Solomon Kay, RCAF, rear gunner; F/S PGF  Redstone, RAF, wireless operator; and Sgt FJ Abery, RAF, flight engineer. The mission was typical Pathfinder - to mark the target-  the ball bearing factory at Schweinfurt, Germany. The outbound flight was uneventful. No enemy fighter were spotted along the route nor over the target - not unusual according to pilot, Basil Jackson. Having marked the target, JB241 remained in the area to view the fire damage and once satisfied the target was well lighted the crew set course for base.  As the aircraft approached the french border, a german fighter attacked from below and behind the Lancaster. The canon rounds punctured the fuel tanks and some oxygen bottles. The starboard inner engine and wing caught fire and within seconds of the bail-out order being given, the aircraft exploded. throwing clear the front-end crew members, pilot, navigator and bomb-aimer. The remaining crew members perished in the explosion.

The three crew members who were ejected by the explosion parachuted to safety. They were captured by the Germans and spent the remainder of the war as POWs in Stalag Luft 3.  F/O Jackson was a US citizen who had enrolled in the RCAF. F/O Radford last know address was in Brockville, ON. There is no personal information on F/O Freiburger.  The crew members who perished lie in the Bermering Communal Cemetery. P/O Eastham was from St.John, NB; and P/O Solomon was from Toronto, ON. There is no personal information on the RAF crew members, F/S Redstone or Sgt Abery.

The debris of the Lancaster came to rest near Bermering. Some of the inhabitants of the village  witnessed the accident.  They heard  the aircraft approaching, saw the aircraft burst into flames and the subsequent explosion. They watched the shower of debris, including a large piece of the fuselage, which landed in  the village square. None of the 200 inhabitants of  the small village were injured. One of the witness was a small boy who remembers the event clearly and who vowed that night that someday he would  do something to honour those young men who gave their lives for freedom. His name is Pierre Weisse.

To mark the 60th anniversary of the accident, the citizens of Bermering led by their Mayor, Mr Pierre Weisse, decided to erect a monument  in honour of those young members of 405 Squadron. They planned an official unveiling of the monument and decided to invite surviving crew members or relatives to the ceremony. Finding surviving crew members or relatives obviously presented a challenge. A request for assistance was submitted to 405 Squadron and they in turn requested the assistance of the Association.  Fortunately, one of the main actors in this saga is a member of the 405 Squadron Association. F/O Basil Jackson, was a young American citizen at the outbreak of WW11. On a trip to New York he located a Royal Canadian Air Force recruiting office and signed up. Shortly thereafter, he was on his way north of the border to train as a pilot, which eventually led him to fly Lancaster bombers as a member of 405 Squadron based in Gransden Lodge.  Now residing in Tybee Island, Georgia, and remaining in good health, Basil Jackson was contacted and displayed a keen interest in attending the ceremony. He was obviously the guest of honour. Also present were Diane Finkle and Douglas Farmer, respectively granddaughter and grandson of Douglas Eastham, JB241 mid upper gunner. Douglas Eastham was an accountant for a major Canadian bank when Canada declared war in 1939. He enrolled and initially served as an Air Traffic Controller. When a call came for volunteers to fill vacancies in the tail-gunner trade, he responded and eventually was posted to 405 Squadron.

Years later, Douglas Eastham’s service to the Air Force would continue when his grandson, a young boy also named Douglas, would participate in a contest to name the soon to be formed Canadian Military Air Demonstration Team. His submission was eventually chosen and the Air Demonstration Team that we know today as the Snow Birds somehow can be traced back to a young mid-upper gunner flying 405 Pathfinder Squadron bombers during the Second World War.

The Lancaster monument is erected in the Village Square of Bermering, near the spot where a large piece of the Lancaster fuselage came to rest. The area has been named  - Place du   Souvenir - to commemorate the event. The monument was unveiled by Mr Pierre Weisse. Present at the ceremony, with the guest of honour Basil Jackson,  were Ms Laurette Glasgow, Minister Plenipotentiary, Canadian Embassy Paris, representing the Canadian Government. BGen Bill Newman, Military Attaché/Defence Adviser, Canadian High Commission, London, represented the Canadian Armed Forces. 405 Squadron was represented  by Maj Marc Bouchard, Deputy CO , Capt Bruno Baker and M/Cpl Harold Alain. Ms Lorna Hayes represented the Association. Also in attendance at the ceremony were several retired and serving high ranking French Military Officers. The ceremony was followed by a luncheon/reception which was attended by all the guests as well as most of Bermering's residents.