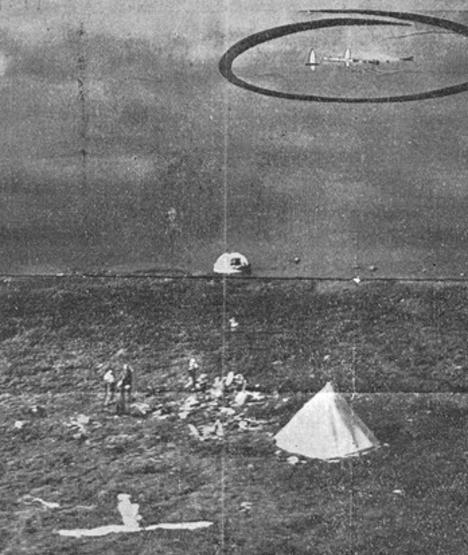 The Lancaster [ex-Malton Mike] landed on the only sandbar in the 40-foot deep lake, though it caught fire, it didn’t explode, all eight crewmen escaped alive, the sun came out at just the time a rescue aircraft arrived at the spot. 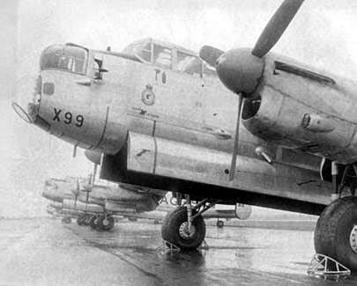 The belly-landing of KB999 was the result of “a chain of miracles.” 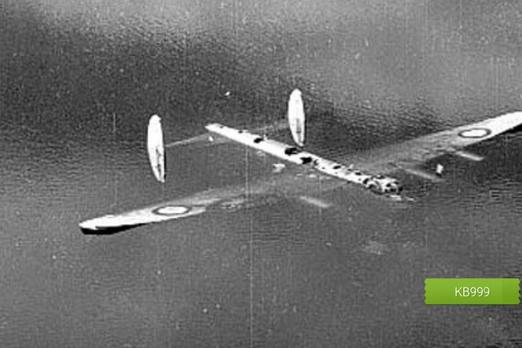 From the total production of 422 Lancaster Mk. X [bomber] airframes, 105 were lost to enemy action or crashed in England. With the end of hostilities 160 of the surviving bombers were flown back to Canada and placed into long-term storage. Then the cold war came to Canada, after an all to short rest, 288 Lancaster aircraft were taken back on charge by the RCAF, and enjoyed an entire second life in postwar service. Metal fatigue, old-fashioned parts, outdated equipment all had to be combated – a job more difficult and much less glamorous than building a new aircraft. When the new modified aircraft appeared they were given new designations – Mk. 10S [Standard], Mk. 10 AR

[Area Reconnaissance], which in total formed eight different versions. The 10MR or Maritime Reconnaissance modification was produced in greater numbers [75] than any others, and over half of these modifications were sub-contracted to de Havilland in Ontario. Fairey Aviation in Nova Scotia modified the remaining Mk. 10 MR aircraft, including KB999.

After modification KB999 began service with the newly formed [31 May 1950] No. 405 [Eagle] Squadron based at Greenwood, Nova Scotia. The aircraft was known as  “triple nine” by the crewmembers and received the international morse code letters VCAGX. VC [Victor Charlie identified her as Canadian], A [Alpha as Air Force], G [George for 405 Sqn.], and X [X-ray for serial 999].

Lancaster KB999, ex-Malton Mike flew routine reconnaissance patrols on the East Coast of Canada until Sat. 22 August 1953. Due to mechanical problems on a No. 408 Squadron Lancaster, triple nine and crew of eight were ordered as a replacement and dispatched from Greenwood, Nova Scotia, to Rockcliffe, Ontario. 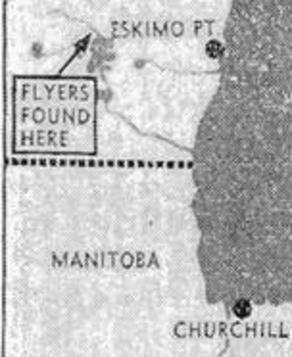 Lancaster KB999, ex-Malton Mike flew routine reconnaissance patrols on the East Coast of Canada until Sat. 22 August 1953. Due to mechanical problems on a No. 408 Squadron Lancaster, triple nine and crew of eight were ordered as a replacement and dispatched from Greenwood, Nova Scotia, to Rockcliffe, Ontario.

No. 408 Squadron were conducting classified aerial photography Russian Ice Stations] and gathering air samples over the Arctic region from Cold War Russian Hydrogen bomb test fall-out. Upon landing at Rockcliffe a special air filter was attached to each side of the Lancaster nose. The crew were then briefed to fly in front of and parallel to a huge storm system but to stay out of the cloud as moisture would neutralize the samples. The flight plan took them from Rockcliffe northwest to a point over James Bay, over Hudson Bay and then a turn west at Chesterfield Inlet, a zigzag course to get air samples and then south to Churchill and recovery.

The first half of the flight plan was completed as briefed, air samples were obtained and the crew now sat back for the flight to Churchill for fuel.  The Lancaster was flying at 20,000 feet altitude and the crews were on oxygen. Suddenly the rapidly approaching frontal system was upon them, cloud above the aircraft, electrical storm, heavy rain and gale force winds below. At the [ETA] estimated time of arrival for Churchill, approx. 11:15 pm, the Captain descended into the storm to 1,800 ft [ASL] above sea level. Unknown to the crew the Captain had not established his correct position for three hours before his descent even though astro conditions prevailed.

The aircraft now flew in and out of low cloud, as heavy sleet fell on the flat terrain dotted with hundreds of lakes. A very weak [RR] radio range signal was being received but was far too weak to home onto. The crew now began to realize they were lost. Five minutes past the ETA, the Captain thought he was too far south and turned into a northerly heading. After eight minutes a north–east course was established with intention of picking up the Hudson Bay coastline. The Captain then asks the radar operator if he could find the correct position by using H2S radar. He was told this was impossible as they were flying low level with no shoreline to get a true fix. They continued to fly over unknown terrain maintaining [VFR] visual flight rules. The last radio message was sent to Churchill at 11:25 pm, when the Captain asks if he could be guided in by radar. The answer was “no”.

“Suddenly I felt the starboard wing and engine strike the ground, the impact was very hard ripping off the outer engine and then a burst of flame. I was thrown against the fuselage as the aircraft made a sudden twist to the left and bounced back into the air. I knew the next impact would be sure death, and then we struck water, coming to a stop resting on a sandbar in a lake. It was all over in thirty seconds, but burning oil and fuel covered the water on the complete starboard side of the Lancaster. Before navigator Gossell and myself could exit the aircraft an electrical fire ignited in the complete fuselage, we were both burnt on hands and face. F/O Wally Grbac suffered cut hands and broken nose as he was thrown through the bomb aimer’s nose cone on impact with the lake. I made my way to the port wing, stripped my clothing and dipped my toe into the water. It was ice cold so I remained on the wing, while other crewmembers remained in the water for 30 minutes, then the fuselage fire went out. The crew now joined me on the main wing where we spent a wet and cold night with little sleep.

In the light of day we freed the rescue dinghy and rowed to shore, taking what equipment we could find. We had very heavy rain for the next two days and then on the third day the rain stopped but heavy cloud cover remained. We returned to the Lancaster, cutting holes in the top fuselage and recovered food and cooking equipment. F/O Murray became the cook serving burnt cocoa and oatmeal bars cooked in the survival pressure cooker. Gossell and myself were given first aid for our burns while other members were assigned two-hour watch shifts, two-hour firewood patrol and two hours rest. The camp soon took shape consisting of the covered dinghy, a teepee made from parachutes draped over tree poles, and two large signal fires constantly manned. Supper consisted of meat bars; packages of dry biscuits, and tea. The burnt rations recovered from the Lancaster were mixed with good food and cooked in the pressure cooker. On occasion we found wild blueberries that we had with the candy ration, which became a real treat. On Saturday 29 August at 1:45 pm the sky cleared and out came the sun for the first time in seven days. We then heard and saw a Dakota aircraft in the blue sky. Captain Stamers flashed a hand mirror at the direction of the aircraft and flares were shot into the sky. The ordeal was at an end.”

The lost Lancaster KB999 had been the object of a search by fifteen Lancaster aircraft and four Dakota, which covered 100,000 square miles. S/L Jack Hudson and crew were flying in Dakota #568 when they spotted the sun’s rays reflected from the mirror held by F/ O Terry Staners. Later that day, an Otter aircraft equipped with floats and flown by F/O L.G. Denman of Toronto, made a hazardous landing on the mile-long lake. Today Malton Mike remains at the bottom of the unnamed 40-foot deep lake, 192 miles northwest of Churchill, Manitoba.