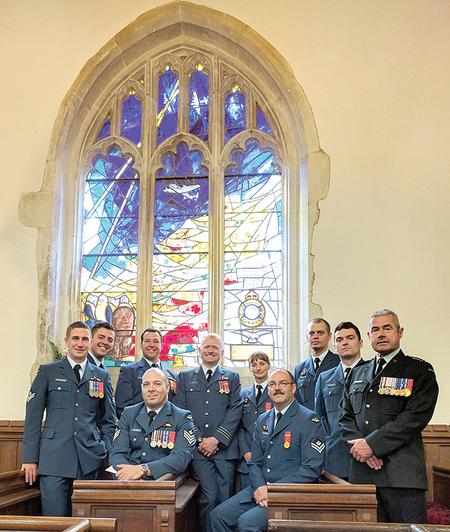 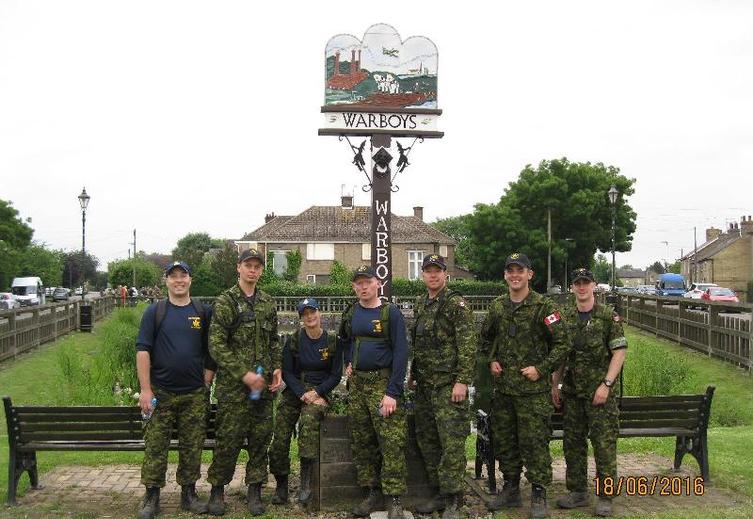 The day of the march itself proved mentally and physically challenging for the members of the aptly named “Op Sore Talons” team. Starting out at 4 a.m., spirits were high. After the ﬁrst stage, faces were fresh and invigorated. By the third stage, the enormity of the challenge set in and the value of having a search and rescue technician, borrowed from 413 (Transport and Rescue) Squadron, Master Corporal Kevin Cochrane, on hand to provide medical support became blindingly clear.

While 14 Wing Greenwood was kicking into high gear to celebrate the 75th anniversary of four 400-series squadrons on the base, a team from 405 (Long Range Patrol) Squadron, the sole Royal Canadian Air Force squadron designated as a Pathﬁnder Squadron, was ﬁnding new gears of its own at the annual Pathﬁnder March in the United Kingdom.

A 405 Squadron team of 10, including marchers and support staff, took on the challenge of marching the arduous course to celebrate not only the squadron’s 75th anniversary, but also the 74th anniversary of the creation of the Second World War Pathﬁnder Force.

The Pathfinder Force of squadrons included hand selected aircrew that demonstrated exceptional navigation abilities. This elite force was tasked to lead bombing missions, marking targets and guiding the waves upon waves of bombers that followed - all with the focus of increasing the effectiveness of Bomber Group. In commemoration of the Pathﬁnders, the annual Pathfinders March was created.

The march, hosted at RAF Wyton, England, gives participants 20 hours to navigate a 74-kilometre (46-mile) course through the countryside connecting all the now decommissioned airﬁelds used by the Pathﬁnder Force during the Second World War. After months of preparation and training, the 405 Squadron team departed June 14. Over the next ﬁve days, representatives not only participated in the march, but also reconnected with the communities that housed, fed and hosted 405 Pathﬁnders during the war.

The Royal Air Force and the village of Great Gransden, the site

of the airﬁeld 405 Squadron used during the war, were

gracious hosts. The people of Great Gransden welcomed the

team into their homes for tea, took members on a tour of the

old airﬁeld, now a glider training centre; and joined the team in

commemorating the lives of the 801 members of 405 Squadron

who made the ultimate sacriﬁce during the war. That

houses a stained glass window dedicated to the members of

the 405 Squadron Pathfinders. All this was rounded out with a

visit to a local pub, members of 405 used to frequent in war

years, The Crown and Cushion.

through the longest stage: one the team affectionately dubbed

“The Soul Crusher.” At the team’s darkest hour, the bright and

ever energetic face of Padre Rory MacDonald bounded into view

to raise our spirits with bagpipe music and quirky anecdotes. His intercession at that moment got the team over the hump (and precluded him having to fulﬁll the other duty he was brought along for - last rights). Despite the challenges presented, all 405 team members were able to complete the march in the required time, in good spirits and with minimal injuries.

The following day, the team took in the sights of London on a walking tour, albeit a short and very slow one. No sooner had they finished reconnecting with the past in the United Kingdom, the team was back on the plane to Greenwood and home, ready to celebrate the squadron’s 75th anniversary with sister 14 Wing squadrons, 404, 413 and 415. The opportunity to experience the squadron’s history in the ﬂesh was invaluable. Walking the streets of the towns and runways of the airﬁelds once the site of such heroism and bravery humbled team members, and provided a unique, ﬁrst-hand perspective.

Many years have passed since those days, but 405 Pathﬁnders are still leading the way on international operations. History has come full circle. The squadron members only hope the service and sacrifice they commit to today will one day be worthy of those who sacrificed so much in the past for their nation, and the world.