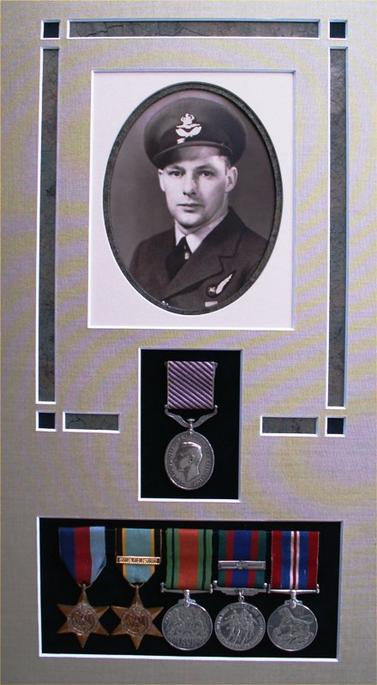 Our crew was the top crew (Note: Their pilot became Squadron Leader!) We had a lot of experience – all had over 60 trips (missions). We were the most experienced.”

Jim’s Crew (shown in a photo with accompanying signatures):

Jim enlisted in the Air Force in June 1940, at Quebec City since he was working in that province. He was accepted into the Air Force and began his basic training from July to September in Regina.

On May 10, 1941 Jim boarded the armed British merchant ship Aurania in Halifax to sail for Britain. Ten days out of Halifax German submarines attacked their 32 ship convoy, both during night and daytime, sinking 11 ships.

Jim served two complete operational tours of duty which in his case consisted of 64 “Ops” (also called “Trips” or Missions).

For Jim’s first Tour of Operations he was trained as a Wireless Air Gunner (WAG). He began Ops with 104 Squadron of the Royal Air Force, in a Wellington bomber, on August 28, 1941. Jim was 2nd wireless operator that night as they attacked Duisburg.

During his first Tour of Operations Jim had some notable experiences. In April 1942, while flying in a two engine Wellington bomber in 158 Squadron of the RAF, with Jim as wireless operator and air gunner, they flew four missions in eight days and their aircraft was hit and damaged by enemy fire every time!

On one mission Jim’s Wellington was flipped over on its back by a nearby flack burst. The pilot dived and pulled the aircraft out at 1500 ft above the ground. They dared not climb as they would be too slow and vulnerable. Jim went to the nose gun. As they flew across occupied Europe he and the pilot tried to pick out and avoid antiaircraft batteries. They were under heavy ground fire with tracer bullets that looked Jim said, “like snow coming toward your car headlights as you drive in a snowstorm”. Jim would fire his machine gun to try to keep the enemy gunners ducking, the tail gunner did the same. One of the crew dropped identification flares trying to confuse enemy gunners. They returned with no crew members hurt.

In May and June1942 Jim was in conversion training to four- engine Halifax bombers when his crew took part in the first three 1000 Bomber raids against first Cologne, then Essen and finally Bremen.

In June 1942, Jim became an air bomber while flying in Halifax bombers with 158 Squadron. Effective December 31, 1942 Jim, then a Flight Sergeant with 158 Squadron,  received the Distinguished Flying Medal (commonly known as DFM). He was invested with the DFM by King George VI at Buckingham Palace on13 April 1943. The award recognized, “As wireless operator and air bomber this airman has participated in numerous sorties including several attacks on Essen. His wireless skill has been invaluable. His success as an air bomber has been achieved by untiring efforts and dogged determination to ensure that his bombs were dropped on the enemy with the most destructive effect. The calm and gallant manner in which Flight Sergeant Meagher has performed his tasks has set a splendid example.”

On June 28,1944 Jim began his second operational tour of duty with 405 Squadron. He was an H²S operator (this was an airborne radar for navigation, precise target identification and bombing) in a Lancaster bomber with the elite Pathfinder Force. His pilot was Flight Lieutenant Gosman (later Squadron Leader) and their entire crew consisted of men on their second Tour of Operations. Their crew eventually became Master Bombers and Deputy Master Bombers on many missions, meaning that they led and directed all aircraft attacking that target.

The Pathfinder Force flew first to the targets. They were chosen as experienced and accurate crews who were given special colour indicator markers to drop to direct all the following bombers. Pathfinders went first before radar jamming materials were dropped and so they were very exposed to the enemy defenses. Furthermore, they often had to remain flying around the target to keep marking it as the bombing raid progressed.

On August 15, 1944 Jim’s Lancaster was bombing Brussels Aerodrome from 5000 m height  during a daylight raid. They were Deputy Master Bomber and while approaching the target alone their aircraft was badly hit. Their port outer engine, plus their starboard outer engine and their hydraulic system were all hit but they managed to return to base flying on only three engines. Jim wrote in a letter about this stating; “We came out through Ghent in Holland on the way home. We were shot up and had an engine burning. We left the coast and started across the water – burning. It took some nerves to cross the water like that. Another Lancaster flew with us for a while. We landed at our own airfield on 3 engines, a priority landing.”

Not everything was always serious - Jim told me this story. While returning from one mission they got the idea to throw their oranges out the aircraft window so that they would bump against the aircraft and they would tell the gunners (mid-upper and tail gunner) who were farther back in the aircraft that they were being hit by flak. The idea seemed like fun until one orange knocked out an engine - then it got more serious for everyone as their aircraft had to fly back on three engines.

Jim’s last operational mission was a nighttime raid on Saarbrücken on October 5, 1944.

“ Sixty-four was a lot of trips ( missions)! Four to eight was average. I gained a lot of experience with a good pilot my first 4 trips. Thirty-two trips were on Pathfinders and 32 on RAF Squadrons. I was both a Wireless Operator ( 9 to 12 trips) and as Air Bomber in my first tour before joining RCAF in 1944. Other trips done in 1941 – 42 (the bad years) we were short of crews, defenses were heavier. Many airmen were shot down. Most of the trips were in the Ruhr Valley; the industrial area of Germany.”

“We were all returning RCAF airmen there to pick a crew from amongst ourselves otherwise they would pick one for us.  There we were all well experienced – had all completed a tour on other squadrons. We were lucky to get the best Captain, Navigator and I was a bombing instructor (for the previous 2 years after my first tour). We had re-volunteered and accepted as Pathfinders.

The Experiences of Flight Lieutenant James (Jim) M. Meagher DFM
A Veteran of 405 Squadron and Two Tours of Operations in
Bomber Command with the RCAF and RAF 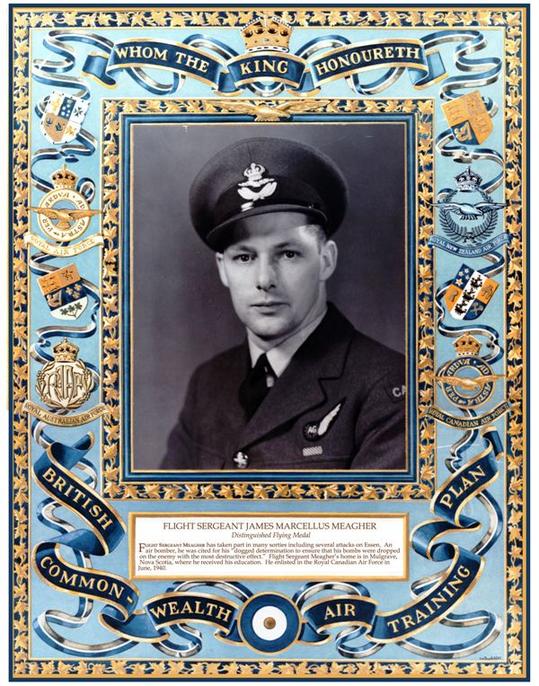 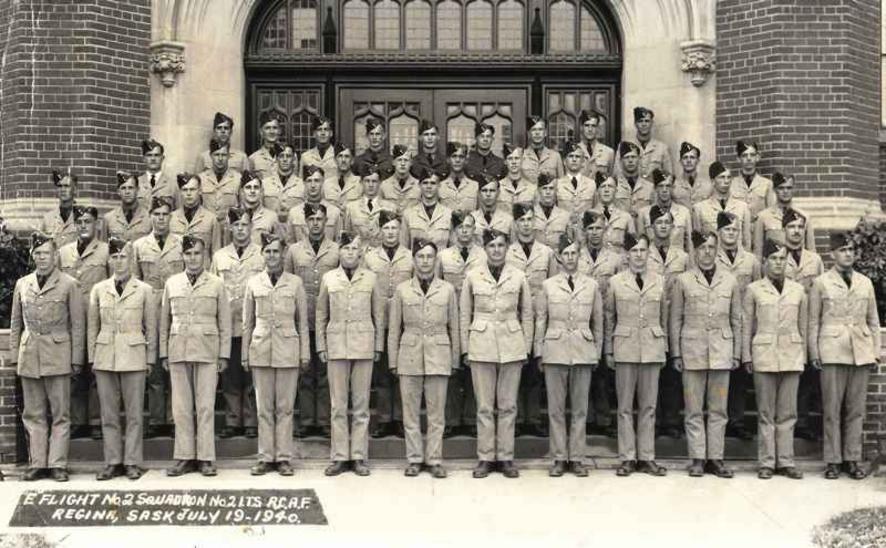 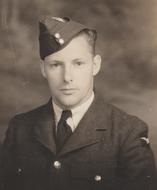 “Pathfinders were different from the Main Force squadrons. The Pathfinders went out at the head of the Main Force to mark the targets. We had no trouble until we dropped our markers. Then they (the German defenses) started putting up decoy markers to throw off the bombers. The markers were target indicators. We dropped a bomb that would burn coloured on the ground for quite a while to show where the (Main Force) bombers were to drop their bombs. The Germans would set decoy fires outside the target area to throw the bombers off. It was our job as Pathfinders to stay around and make sure the bombers dropped their bombs on our marked site not the decoys. If our bombers were off target, we Pathfinders were the only ones allowed to talk on the radio. They couldn’t answer. We would call to them via radio and remark the target. We always went with 2 Pathfinders as markers, a Master Bomber and a Deputy (Master Bomber) in case the first one got shot down. When the raid was over we took pictures. I would get a thrill seeing the photographs more so than the actual bombing because we could not see anything – just our bomb sites.”

“One trip, somewhere in France (summer 1944) in daylight, we (as Master Bomber) had marked the target about 4 times and the Deputy had followed us each time. No trouble. But then our Captain said let’s let the Deputy have a chance to try – he needed the experience. We followed in behind him and then saw him go on fire just below, in front of us. We never got hit. I watched from the nose; 3 men bailed out in front of me, one had a torn parachute.( I talked to him later.) I could see he was drifting away from the other 2. The Deputy dropped his markers on the wrong place when he was hit. We had to go in and mark again.” 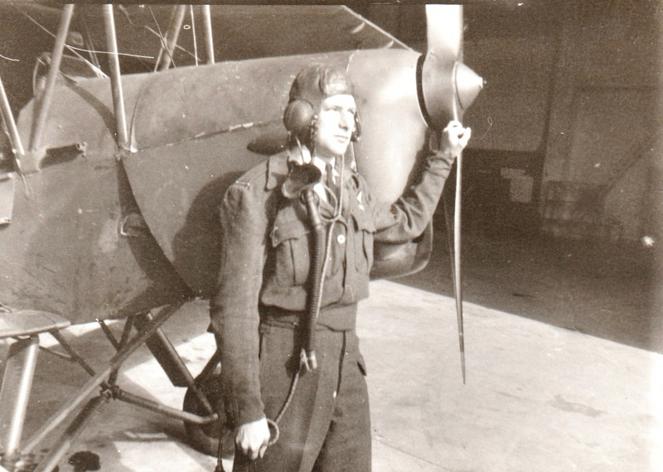 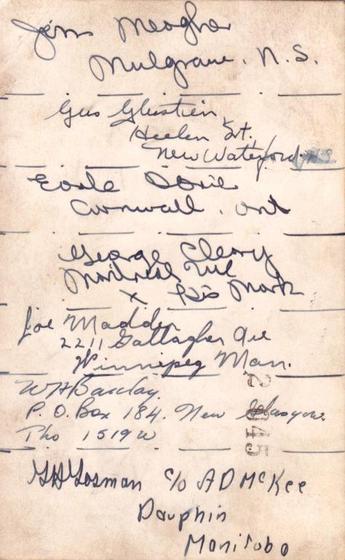