He went on to become the Commanding Officer of VP8 (also known as the “Tigers”) in Brunswick, Maine. That service was a source of special pride to him, and he was admired and beloved as Commander of the P-3 Orion unit. His last assignment was at the Naval War College in Newport where he served until he retired until 1979. Russ began his civilian career in financial planning, but found a new professional home in real estate, where he excelled at helping others find their homes. He worked first for Carey, Richmond & Viking and then became part-owner of Redwood Viking. Russ’s clients were uniformly impressed by his warmth, integrity, good humor, and professionalism.

Russ Mowery was blessed in his personal as well as professional life. He married his high school sweetheart, Nancy Anne Russell as his wife in 1958. They had four children, and the couple celebrated 63 years of marriage in June. Russ was devoted to his family and friends – known to all as a “stand-up guy,” one who could be counted on. He saw the best in others and was always eager to help. Russ was an active parishioner and a lector at St. Barnabas Catholic Church for many years. He enjoyed both golf and duplicate bridge. Russ is preceded in death by his son Ronald Mowery and is survived by his wife Nancy, three of their children: Michael Mowery, Mary Anne Mowery Segerson, Teresa Anne Mowery, seven grandchildren: Christopher Segerson, Katie Zilgme, Kevin Segerson, Rachel Mowery, Kelly Mowery, Charlotte Mowery and Layla Mowery and his first great grandson, Victor Segerson Zilgme (born July 11, 2021).

On August 9, 2021, Russell Mowery passed away peacefully at his home in Portsmouth, Rhode Island with his wife Nancy and children beside him. Born in Canton, Ohio on May 25, 1934, Russ always had a song in his heart. He attended Washington High School in Massillon, Ohio where, as Drum Major, he struck up the Massillon Tiger Swing Band with his forward strut. He brought his buoyant spirit to the U.S. Naval Academy in 1954, graduating in 1958. Russ earned his wings as a naval aviator in 1959 and obtained his master of education from the University of Virginia in 1966. He went on to serve his country during the Cuban Missile Crisis, the Vietnam War and the Cold War as well as other numerous missions. When a fellow aviator’s plane and entire crew was downed during the Vietnam War, Russ volunteered to step in to take his place and finish his mission. He primarily flew the P-3 Orion, the world’s premier antisubmarine and maritime surveillance aircraft.

Russ served in several squadrons and flew multiple deployments, seeing almost every corner of the globe. One particular highlight of his service was being stationed as an exchange instructor with the Canadian Forces in Greenwood, Nova Scotia, a rare honor for an American servicemen (1969-1972). 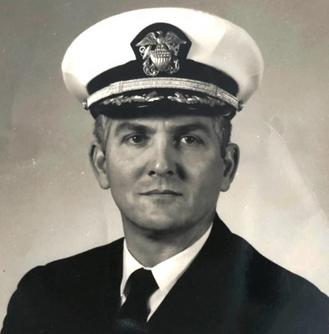