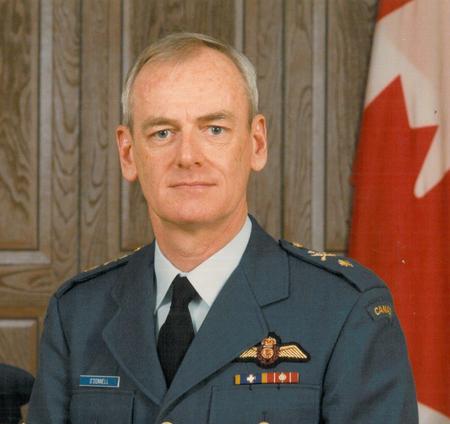 Peacefully at home, surrounded by his immediate family, on Thursday, September 24, 2015 in his 76th year. Beloved husband of Julianna (nee Boyko) for 54 years. Cherished father of Kathleen (Eric Devenny), Sean, and Erin (Claude Paul). Much loved and very proud and doting grandfather of Laura and Caroline Devenny. He joined the RCAF in January 1959 and trained as a Radio Officer and Navigator. His flying tours included Air Transport Command (426 and 437 Squadrons) and Maritime Command (VP 405). Served as Squadron Commander (VP 405); Base Commander of CFB Greenwood, NS; Commander of Maritime Air Group; and Commander of Canada's Northern Regions. Served abroad in tours at NATO's AFCENT HQ in the Netherlands and as a faculty advisor at the NATO Defence College in Rome. He also attended the RAF Staff College in the UK. He was appointed Deputy Commander of Air Command, ADM (Personnel) of DND, and his final appointment being Vice Chief of the Defence Staff. After retiring from the military, he joined SPAR's Aviation Services Division and then later became a senior partner at CFN Consultants. He also served as President of the Canadian Defence Industries Association. His greatest joy in life was being with his family. Paddy was known to be unfailingly kind, generous and thoughtful to the people around him. Friends may call at the Garden Chapel of Tubman Funeral Homes, 3440 Richmond Road, Nepean on Tuesday, September 29 from 7:00 - 9:00 pm and on Wednesday, September 30 from 2:00 - 4:00 & 7:00 - 9:00 pm. Private Family Service. In lieu of flowers, the family requests that any donations be made to the Canadian Cancer Society.