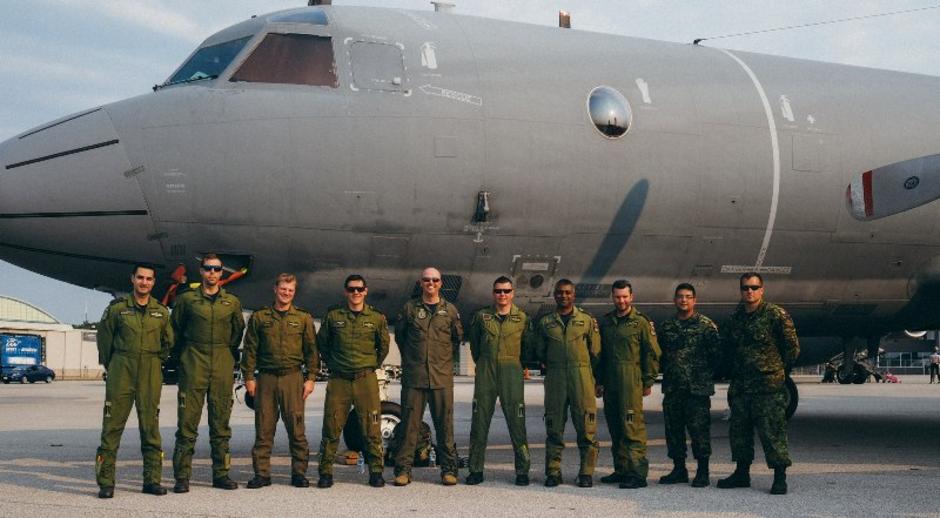 The streets and waterfront of Cleveland were well-travelled by aircrew, technicians, historians and aviation enthusiasts alike on September’s Labour Day weekend. Included in these were eight aircrew and two technicians from 405 (Long Range Patrol) Squadron, 14 Wing Greenwood, who  took advantage of a great opportunity: the Cleveland National Airshow, a.k.a “Rock the Runway.” The crew deployed from Greenwood on the Friday afternoon and entertained the crowds with a static demonstration and walkthroughs of the CP140 Aurora aircraft. Set up of all the gear and preparing the aircraft for demonstration took place the evening prior to the airshow and, come bright and early Saturday morning, the gates opened and the work began. Saturday was unusually cold and the airshow started off a bit slow, with attendees trickling in; however,  the show soon picked up steam. By mid-afternoon, the Aurora had a consistent line of almost 50 people gathered outside. The airshow was a great attraction for the Cleveland public and tourists from all over, with approximately 100,000 in attendance. Static aircraft included the United States Coast Guard’s MH65Cs, United States Air Force Hercules and C17s, A10 Thunderbolts; NASA research aircraft, historic C123, B25 and SVN1; and several smaller aircraft and commercial airliners. The Aurora was a surprise favourite, with many rave reviews coming from attendees who walked through the aircraft and asked questions. Rock the Runway also provided opportunities to watch incredible aircraft in action, with memorable ﬂying displays from the U.S. Navy’s F/A18F Super Hornet demonstration pilot, the U.S. Air Force’s A10 Thunderbolts, an acrobatic demo from Sean D. Tucker, piloting a one-of-a-kind Oracle Challenger III bi-plane; the fast and rare de Havilland D.H. Vampire Jet, and, of course, the U.S. Air Force Thunderbirds Jet Demonstration Team. While the airshow provided an opportunity for attendees, an even greater experience was afforded to the members of the Aurora crew. They were had the chance to inspire and amaze attendees, from children with sparkling eyes and big smiles to inquisitive adults with questions and curious minds. Perhaps the best was giving any visiting veterans a window into their past, and taking in their knowledge, experience and stories, with some having ﬂ own on U.S. Navy P3s, or even P2 Neptunes or P5 Marlins. The members from 405 Squadron may have deployed to support the Cleveland National Airshow, but many found Cleveland gave them more than they could have asked for.