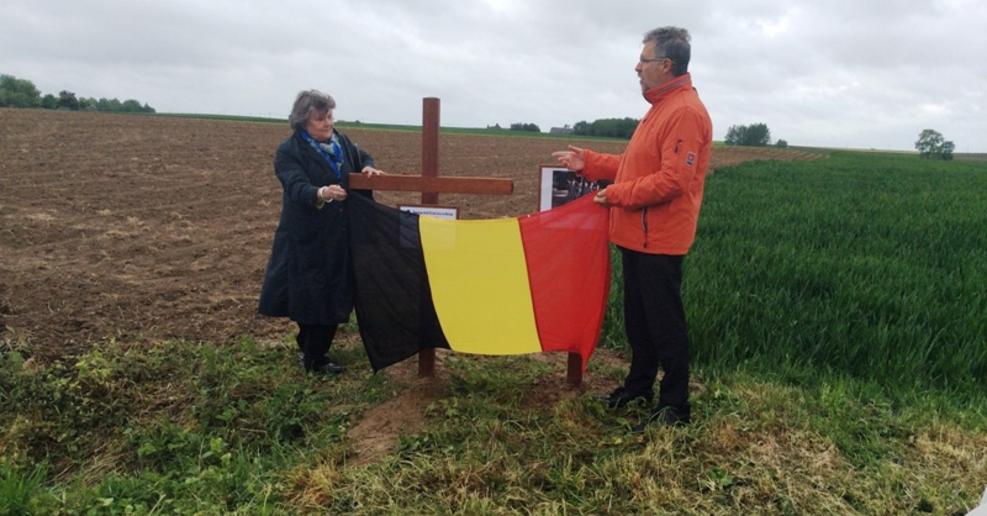 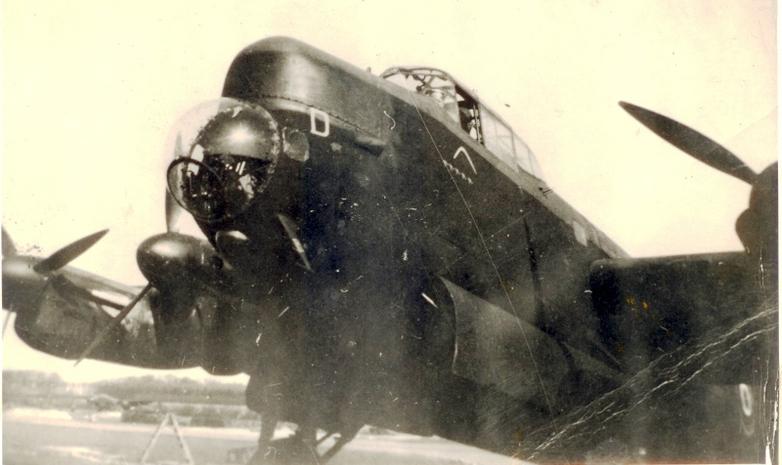 The target of the raid was the rail yards at Haine St-Pierre in Northern France. And was part of the “Transport Plan” component of Operation Overlord (D-Day landings in Normandy on June 6) intended to destroy/disrupt rail links to Northern France and Normandy to slow down German reinforcement of the area following the landings less than four weeks away. Following a successful raid that destroyed a large part of the rail yards, LQ-D turned for home.

At approximately 03:37 am LQ-D was intercepted and attacked by Uffz. Konrad Beyer of 1./NJG4. Eight minutes later at 03:45 am, at a recorded higher altitude, LQ-D was attacked by a second 1./NJG4 aircraft, piloted by Lt Wolfgang Marstaller in a Messerschmitt Bf110 night fighter. Marstaller’s attack is documented in a letter sent to his parents a few days later on May 12. A few seconds after Marstaller fired on the Lancaster, a Serrate Mosquito of RAF 169 Squadron attacked the German aircraft. A description of this attack is also contained in Marstaller’s letter to his parents.

Translation of Wolfgang Marstaller’s letter to his family following his Lancaster “victory”  Friday, May 12th, 1944

Dear family,
A lot has happened these past days. I think of my short visit to you as very long ago. You will think more about this Sunday as I do.
The return voyage was very problematical. As we arrived in Jena at midday there was an alarm but that didn’t disturb us. At dusk, we returned to our base where we arrived at 22:00. We had to eat in a hurry as the Tommies were arriving.

At first, nothing happened but at 03:00 we had to take off. It was very light this night so we could see the Tommies in great numbers. My crew have seen at least 10 but we could catch only one. As I came near enough and took a shot (If only the muzzle flash wouldn’t blind one
so much) the swine fired a flare and an enemy night fighter arrived promptly. I couldn’t continue my attack and had to flee from the fast Mosquito. It came after me however and wouldn’t let go. At a very low level (At night at 3 feet above the ground!) we shot at each other. After we gave him one and he flew off, I had to make an emergency landing as we had taken damage. I found a suitable field so nothing went wrong during the landing.

My crew had light wounds from flying glass and the hits we took. As we took stock after the landing we saw an impact some 2 miles away. Next day we found that it could only have been my 4 engined bomber. It burned completely with its 7 man crew. We were very happy about
that!
Birthday and “kill” celebrations came together on the same day. I didn’t have time to celebrate however as my commander sent me on a special task, and as a rest, on a trip to the Ardennes.

The kill is very clear so it was awarded very quickly. The same day several hundred bombs fell around us but only Belgians were hit.
Well this is enough for today. When I finish my journey I will write again. Don’t worry. Things will be as they must be and that is good. I am certainly not careless.

Very kind greetings from your Wolfgang

After flying over the target, the crew decided to patrol the area around the Luftwaffe aerodrome at Chievres, Belgium, presumably with the intent of catching German night-fighters as they responded to the nearby raid. A full description of the 169 Squadron Mosquito’s attack on Marstaller’s aircraft is contained in the combat report filed by the Mosquito crew, pilot Fl Lt Woodman and navigator Fl Lt Kemmis.

German confirmed claims for the actions of early morning, May 9 amounted to ten four-engine Allied bombers. Interestingly, Allied losses for the same area and period were only nine aircraft – two of these being 405 Squadron Lancasters including LQ-D piloted by Aussie, Fl Lt Bill Chase.

Two of the German’s confirmed claims were made in the same map grid reference. One at 03:37 am at an altitude of 7,300 meters and a second eight minutes later at an altitude of 7,800 meters. This is irregular as bomber pilot’s standard evasive action when under fighter attack was to “corkscrew”. This meant throwing the aircraft into a steep spiral dive.

The Allied losses are consistent with the German claims with one exception, one for Uffz Konrad Beyer and one for Marstaller were included and both were decorated for their actions.

At this stage of the war, the German’s awarded an Iron Cross – (Second Class) to every crew-member of a fighter that downed an Allied 4-engine bomber. As Uffz. Beyer had five victories on the morning of May 9, 1944, so virtually became an “Ace” overnight. For Wolfgang Marstaller, this was the only victory of his career.

In addition to LQ-D, another 405 Sqdn Lancaster (LQ-W – ND347) was shot down that morning. Pilot Officer Arthur Darlow’s Lancaster Darlow’s crew faired better than the crew of LQ-D with only one of the seven-man crew as Canadian Tail Gunner Flight Sergeant Copeland, was unable to escape the burning aircraft. His body was recovered from the crashed Lancaster site at Bon Secours, Hainaut, Belgium. Fortunately, the other six men of Arthur Darlow’s crew baled out and evaded capture. Their story is told in the book Lancaster Down, written by Darlow’s son, Stephen. In the end, a few seconds separated the successful return of LQ-D and its crew to Gransden Lodge in Eastern England. 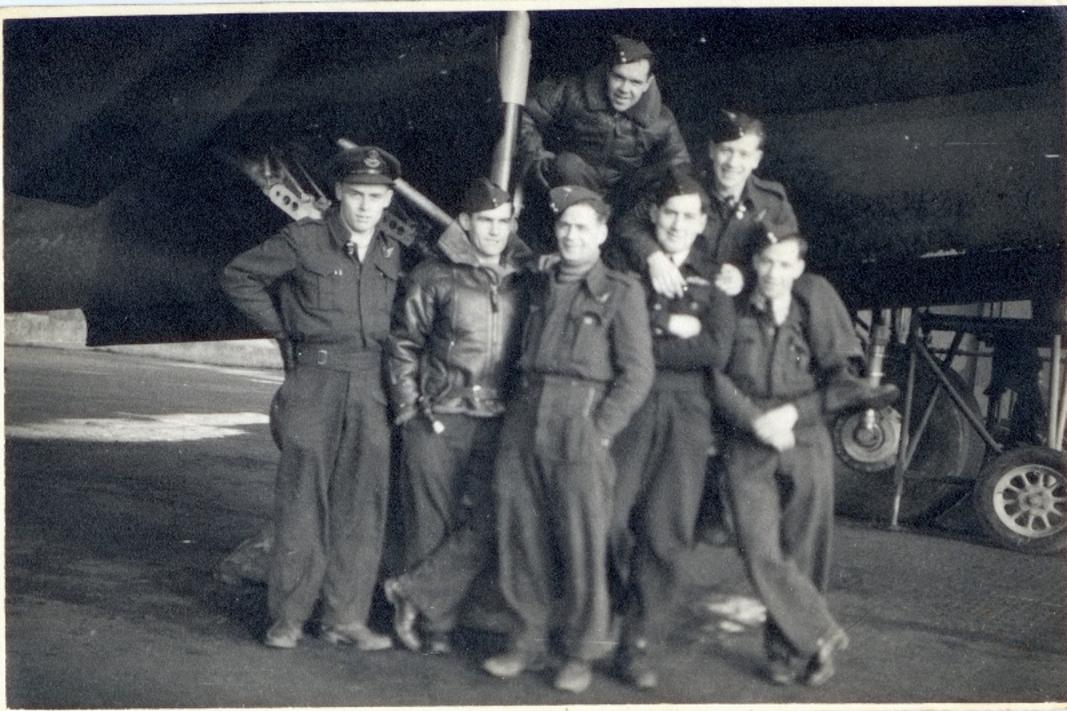 Close examination of one of the artefacts gives an idea of the intense heat of the fire. An aluminium gearbox casing had melted and flowed through the steel gear cogs. The intensity of the fire can be gauged as temperature needed to melt aluminium is 660 degrees Celsius.

On May 9, 2014, descendants of the crew and local people gathered at the crash site and subsequently at Chievres Cemetery in memorial of the crew of RCAF 405 Sqdn aircraft LQ-D. Iona Sinclair , closest crew family member laid a wreath at a memorial donated by Gallaix municipality.

​Latest Update: Following the families 70th anniversary reunion at the crash site in 2014 in Belgium, we are erecting a permanent memorial to the crew on the site. A number of the families from the UK and Canada are hoping to unveil this on May 9, 2019 the 75th Anniversary of the loss of the crew.

Shortly after 2:00 am on May 9, 1944 Lancaster LQ-D (ND587) took off from RAF Gransden Lodge. Their 0peration task designation was “Illuminator”. They were part of the second wave of Pathfinders scheduled to arrive over the target to drop white flares on previously marked red and green TI’s (Target Indicators)

The crew of LQ-D were very experienced, the operation of May 9 being their twenty-ninth operation as a crew, including 10 to Berlin, Germany’s most heavily defended target. Normal Bomber Command aircrew tour was thirty operations, elite Pathfinders crews were required to complete forty-five so as to recover the cost of the extra training they received.

According to eye-witness accounts, the blazing Lancaster that was LQ-D flew on for a short period before breaking up and crashing in a farmer’s field at Gallaix, Belgium. You can read accounts of the last moments of the stricken aircraft and its crew from two eleven-year old boys, the sons of the farmer and one of his farm hands. One of the crew, tail gunner Ron Daniels survived the crash. Scrape marks were found beside his body that indicated he was alive immediately after the aircraft hit the ground but he was dead by the time he was reached.

The eye-witness accounts tell us that the fire from the crashed Lancaster was intense. Leaves on trees two-hundred meters from the site were withered by the flames. The unburned fuel so contaminated the ground that no crops grew on that patch of field for over twenty years.

The following day when the fire had been extinguished, a Luftwaffe detachment arrived to recover the bodies of the crew. Only two of the seven men were identifiable due to their position in the aircraft, Mid-upper gunner Claude Sylvah and Tail-gunner Ron Daniels.

The remaining five crew were buried in a communal “Comrades Grave” at Chievres Cemetery. Their names are inscribed across three headstones.

Twenty-year-old Wolfgang Marstaller was killed on August 18 that year near St Trond Luftwaffe base in Belgium when his damaged Junkers JU 88 fighter crash landed. Also killed was twenty-one-year-old Bordfunker (Radio Operator) Erhard Hurny. The third crew-member, twenty-year-old Ogefr. Kurt Dietzman survived after he was thrown from the aircraft as it crashed. Dietzman was badly injured with a fractured skull. He survived the war and provided a brief interview.

In 2003, local amateur historians excavated the crash site. Only a few artefacts were recovered as the local people had salvaged as much of what was left of the aircraft before it was removed by the Luftwaffe. These artefacts, the largest being one of the propeller blades from the aircraft’s Royce Merlin engines, are on display at RCAF Greenwood.