Sqn Headquarters’ flight suit patch design has changed. The patch is round representing the RCAF Roundel. The contour is light blue representing the Sqn colours. The lower part of the logo is brown representing the ground. The middle display the search lights as found in the Gransden Stained glass Window representing our connection to the past and to the fact that “we will remember them”. The mighty Lancaster was replaced the CP140 Aurora.

Frederick Gladding DFC, a member of the 405 Squadron Association, passed away peacefully yesterday morning, in Paris Ontario, at age 98. Dad completed over 40 operational trips over Europe as a navigator in firstly 415 sqn., and then 405 sqn. Post war he continued in the RCAF Reserves, working most summers in the recruitment office in London Ontario. A role he loved until his discharge in the early 1960’s.

WELCOME TO THE 405 SQUADRON ASSOCIATION

ABOUT US / JOIN US 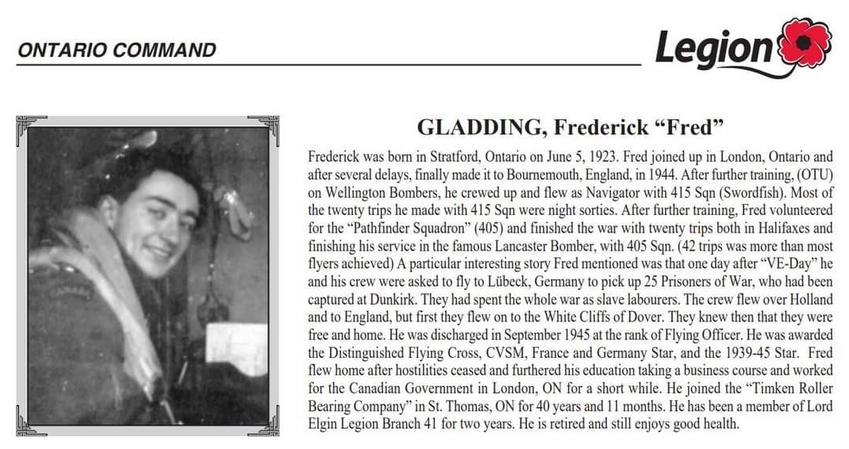 As a result of a Letter to the Editor of the Telegram and a CBC radio interview that same day we located family members of F/O Fowlow. As of June 12,  2021, 6 families have been contacted.

The crest of 405 Long Range Patrol Squadron depicts an eagle's head facing to the sinister and holding in the beak a sprig of maple. Its motto refers to the fact that this was the first and only Royal Canadian Air Force  Pathfinder squadron. The eagle's head which faces the sinister suggests leadership, is derived from the pathfinder badge